The Wands of Doors 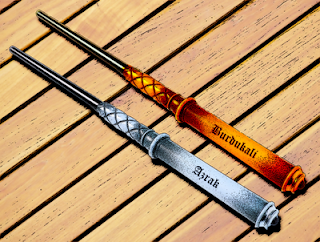 Last night's Labyrinth Lord game was quite fun, in part because of a D&Dified Portal gun that I included in the adventure.  I flippantly mentioned such a thing in a post before the Blogopolypse of last week, but didn't really think I could pull it off.  I threw caution to the wind, to great results.

For those who don't know, the Portal video games contain a gun that can place either end of a wormhole wherever the player wants (within limits.)  This portal generator can be very helpful - or very deadly.  A perfect compliment to an old school game, I think.

The implementation in the game is as follows.  They find a box:

The blue wand creates a six foot tall glowing blue oval.  The wand itself glows blue when the blue oval is created.  The orange wand does the same thing, but in orange.  When both a blue and orange oval exists, the center of the two ovals become transparent, and both ovals become linked.  When an object goes through the blue portal, they exit the orange portal, and vice-versa.

This system of linked portals continues to exist even when you change the locations of one end.  The wielder of the wand can also turn off a portal by simply telling it to close.

One of the more enjoyable features of the portal is conservation of motion, also know as 'Speedy thing goes in, speedy thing comes out.'  To take full advantage of this, long drops allowing a falling body to reach terminal velocity are required. :)

In the adventure, the players found the wands at the beginning of a prison constructed from 'a soon to awaken and escape big bad.' The prison can only be navigated with the Wands of Doors.

The Boy, of course, guessed what the wands were for right off the bat.

The group hasn't gotten very far yet, but they have used the devices in ways I didn't expect them too, including isolating a gargoyle from his buddies, taunting the remaining gargoyles into a lethal trap, and using a high-velocity gargoyle corpse to destroy a large portion of a giant mushroom forest.

I'm very eager - and somewhat frightened - to see what they come up with next.

- Ark
Posted by Arkhein at 5/15/2011 05:45:00 PM
Email ThisBlogThis!Share to TwitterShare to FacebookShare to Pinterest
Labels: Ideas