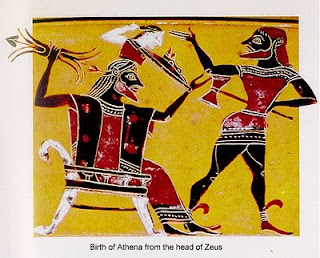 The child of morning, rosy fingered Dawn, crept across the sky in flickering curtains of gold.  She illuminated the mountain fortress of Olympus, which still echoed with the revelry of the night before.

" . . . and so I threw the Acropolis at him.  The whole Acropolis.  True story," mighty Zeus slammed down his goblet of ambrosia while the gods around the table laughed and slapped their knees.  At his right hand side, gray-eyed Athena sat, her chin cradled in her hand, trying not to yawn.

"Father," Athena whispered while the laughter continued, "It wasn't the Acropolis.  It was a whole mountain.  Mt. Etna.  Remember?"

Zeus didn't even bother to look at her.  "Details are boring, girl.  It's the delivery that matters."

"Whatever, Dad," she muttered.  Being the Goddess of Wisdom meant that she was constantly surrounded by idiots.  The grey owl on her shoulder nuzzled her neck, and hooted lightly into her ear.  Athena's eyes instantly shot wide open.  "Father, father, we have a problem!" Athena hissed.

Gray bearded Zeus just talked louder over her.  The son of Cronos was recounting the time he seduced the Spartan queen Leda.

As Zeus recounted the tale, the banquet hall became quiet, too quiet, as they were not even laughing at his jokes.  It was an uncomfortable silence, and Athena tugged at her father's robes, clearing her throat.

"What is it, girl?" he looked down at her and thundered.

She raised a finger and pointed toward the entryway.  There stood Hera, wife of almighty Zeus, arms akimbo, tapping her soft sandal on the hallowed floor.

"Well!" the queen of the gods huffed, face red.  "I thought I would find you here, cavorting with these . . ."

"Hera, my beloved wife, what brings you here at this late hour?"  Zeus sighed.

"Late?" Hera puffed, "Late?  Dawn is outside and you call this late?  Oh no, husband, it is quite early!"

Hera pulled up the hem of her robe and marched around the table, toward Zeus' throne.  The gods around the table were silent.  Dark Hades stared at the floor and shuffled his feet.  Brave Ares picked up a knife and examined his reflection in the silver.  Watery Poseidon, master of the sea, god of horses, and the 'Earth-shaker,' picked up a salt shaker and tipped a few grains into is ambrosia, then watched as tiny bubbles floated upward to the surface.

"How dare you.  I have been scouring the surface of the Earth, looking for you!" Hera jabbed a finger in Zeus' face.

"Do not talk to the King of Olympus in such a manner!" Athena shot up out of her chair.

"I am no daughter of yours," Athena scoffed, "I was born, fully formed, from my father's forehead."

"Oh, you were born fully formed alright, right out of his giant ass, you little shit," Hera hissed.

Before Athena could materialize the golden spear into her hands, Zeus put his palm on the crown of her head and gently, but forcefully, shoved her down into a sitting position.  "Shh, little one." He then turned to his wife.

"Been on the calendar at least a month," Ares nodded.

Hera's stare bore down on the gods at the table and they all found more interesting things to look at, such as the ceiling, the wall, or an imaginary noise in the direction of the kitchen.  She whipped her head back to Zeus, jabbing her finger at him again.

"You've been at it again, and this time I have a witness!"

"I haven't done anything, have I, boys?" he looked back at the gods, who were still busy examining things that weren't there.

Athena stood up, "Hera, this is hardly any way to behave to your King and husband."

"Shut up!" Hera and Zeus said in unison.  Zeus eyed Hera, and then turned to Athena.  "Listen pumpkin, Mommy and Daddy are having a grown up discussion, so go find something else to do."

Athena huffed and collapsed back into her chair, crossing her arms in a powerful pout.

Hera glared at Zeus, rage in her eyes.  "You've been cavorting around with a mortal woman!"

Zeus stared at her.

"What do you have to say for yourself?"

"I'm thinking," Zeus, the aegis-bearer, yelled at this wife.

"You swore to me, you swore on your throne, that you would stop this obsession with mortal women.  No more stalking and raping them.  No more taking the form of an animal and surprising them in the shower!" she shook her fist at him.

Zeus took a deep breath.  "Lies.  All lies.  I have been true to you.  I have not touched a mortal woman.  Who is this witness that tells such falsehoods?"

"He is there," Hera pointed to the entryway.  There stood a form, bent over, hobbling with a cane, his face scarred.  It was Hephaestus, god of fire, patron of blacksmiths.

"Oh, I see you've brought your parthenogenetic son with you," Zeus smirked.

"Tell us, my son, tell us what you saw," Hera said as the crippled god finally made it within hearing distance.

"Um, hi Athena," Hephaestus' voice cracked as he made a little wave towards the girl.

She rolled her her eyes.  "Hello Hef."

"Get on with it!" Hera hissed.

"I'll report only what I saw, the whole truth," Hephaestus started.  "Three nights ago, by a pond, I saw a flaxen haired damsel by the name of Podarge remove her clothing for an evening bath.  Of course, I did not wish to be seen, so I hid in the bushes."

Zeus laughed.  "Can you really imagine gimpy here running around the bushes like a ninja?"

"So, the flaxen haired beauty entered the water, and lo and behold, what should I see but a huge glowing bull descend from the sky, his bovine member fully erect, and he ravished the poor mortal girl from behind," Hephaestus finished.  Hera turned to Zeus, arms crossed, a smug look on her face.

"Oh come on," Zeus said, "Does every huge flying glowing bull with a tremendous cock that anyone sees on Earth have to be me?"

“You are not helping!” Zeus hissed to the gods at the table.

“Mother warned me,” Hera sobbed. “She said I should marry that nice Hebrew god down the road.  But noooo . . .”

“Ambrosia lips,” his voice softened, “That was me.  I was there.  But you’ve got it all wrong.”

“I was there, yes, and I was buggering Podarge.  But Podarge is a boy.”

“What?” Hera gawked at him.

“Podarge was a boy,” Zeus nodded.

“She had breast!” Hephaestus piped in.

“The poor boy was fat.  It was a glandular problem.  You can hardly fault him for a medical issue.”

“Oh come on.  Who are you going to believe, me, or a gimpy god with only one working eye!”

Hera grabbed Hephaestus by the ear and began dragging the cripple towards the door.  “You brought me out here for a boy?  A boy?  You won’t be able to even limp when I get through with you!”

The cacophony of name calling and curses gradually receded in the distance.  Sighs of relief emanated from the table.  Zeus wiped the sweat off his brow and turned to his daughter.

“Thank goodness that is done with, Athena.”

“Now I want you to go to the walk-in closet in my private room.”

“The one with the waterfall and the forest.”

“There are three mortal women in there, a blonde, a brunette, and a red head.”

“Dad!” Athena bolted from her chair.

“Take the blonde.  That's Podarge.  Feed her to a Cyclops or toss her into the sky and make a constellation out of her.  Whatever you do, keep it quiet, but get rid of her.”

Athena shook her head, sighing.  “Father, if you don't control yourself, you may, one day, be replaced with a god who is a monogamist.”

“Nonsense, my girl, nonsense,” Zeus laughed, mussing her hair.  “What kind of human would worship a pansy-ass god like that?”

Rosy fingered Dawn tiptoed across the palace and back down Mount Olympus, heading across the Ionian Sea to Italy, snickering silently to herself.