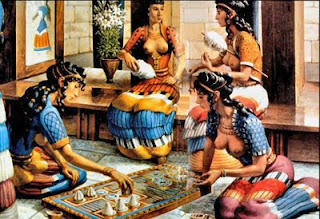 When I was young, my mother would enter a trance-like state and describe her memories of past lives.  One such session stuck with me vividly.  She reported that in a previous life, she had been a man at Atlantis.  At the time, Atlantis was a collection of thousands of little islands with connecting bridges.  The most common transportation was by boat - powered by a network of crystal energy transmitters that ultimately got their power from one big crystal that pulled its amperage directly from the sun and stars.

My mother had been a scientist who had helped develop the whopping big mega crystal.  The crystal was a source of tremendous raw power.  The Atlantean government decided to use that power against the Lemurians, who were a hostile force on the other side of the planet.  Focusing the stellar forces with the crystal, my mother and her fellow scientists blew up Lemuria - sinking it into the depths of the Pacific ocean.  Regretfully, the shock-waves went round the world and caused Atlantis to sink as well.

Needless to say, I had a voracious appetite for anything I could find out about Atlantis.  The home bookshelves were filled with such content.  Jane Robert's descriptions of Atlantis and multi-colored people riding dinosaurs seemed to back up my mother's recollections.  And Charles Berlitz' memoir about diving in the Caribbean and coming under attack from a crystal powered pyramid shooting laser was great.  Edgar Cayce was a bevy of information, what with all of his access to the ethereal Akashic Records.  And von Däniken's Chariots of the Gods - well - can you say NAZCA?

Eventually I picked up Plato and read his descriptions of Atlantis.  I did a lot of head scratching and sat down with pencil and paper to map out what he described.  This - the definitive source on Atlantis - didn't seem to have anything to do with the Atlantis in my mother's books.  Other than that some sort of land mass sunk, that is.

I kept my eye out for more books, though.  One I found in high school pointed out the similarities of Plato's Atlantis with Troy.  It was a great book, full of very interesting details.  The only problem was that Troy never sank.  Bummer.  Other books pointed out Antarctica and Greenland as possible sources.  Sri Lanka?  Hmmm.

After a long, fallow time in my Atlantis research, I came back to it with renewed vigor.  Revisiting the theories, most seemed silly and - frankly - wish fulfillment on the part of whoever was advancing a particular theory.

The theory that really made sense was born out of Spyridon Marinatos' excavation of Akrotiri, a city on the Greek island of Thera.  There had been a thriving civilization on the volcanic island.  Then one day, some four thousand years ago, the volcano blew its top, turning most of the island to ash that sank to the bottom of the sea, and burying what was left.  The event spawned tidal waves that severely crippled the surrounding islands, and perhaps hit mainland areas all over the Aegean and Mediterranean.

Yeah.  Breasts.  The Minoans of Crete and the surrounding islands had some wonderful art - and a lot of it seemed to focus on breasts.  Or, at least, the bits I remember.  They seemed to have something against bras - and shirts, for that matter.  But really, the Minoans had some wonderful art.  The drawings were very cartoon-like - a favorite style of mine.  The sculptures could be very lifelike - very realistic - especially when focusing on bulls.

The Minoans were a very mysterious lot.  They were just beginning to write at the time, and really only using it to record crop productivity and the number of goats owned by a particular noble.  I did a lot of study on the Minoans, and eventually came to the conclusion that no one know what the hell they are talking about if they say anything definitive about the culture.  They could count sheep, they built buildings and ships, they could paint pretty pictures, and apparently they sacrificed people when they felt the need.  They even, apparently, build a handful of buildings in Egypt and the Levant - or, at least someone was there using very similar architectural and artistic styles.  But what the heck that means is up in the air - though I like the idea of trade embassies, myself.

So, my long search for Atlantis ended with - well - it ended with a great big question mark.  To me, Atlantis is the Minoan civilization predating the more sweeping Mycenaean based culture that swept in from mainland Greece.  But all there are are scraps and trash - leftovers of what appears to have been a bright and vibrant civilization.  But it's really not about the destination.  It's about the trip that brought me there, and everything I learned along the way. 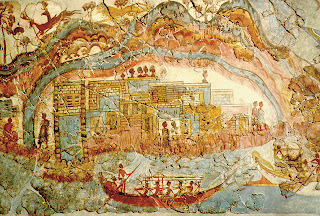 I'd love to create an RPG - or at least setting - based on the Minoans - perhaps with a sprinkle of Greekish proto-mythology dropped in.  What I have in my mind, however, would be a massive undertaking.  And I guess that few would ever want to play it, as it would delve deeply into bronze age cultures and a mindset that is probably very hard for modern players to get into.  D&D with Minoan trappings is not what I am after.

But still, all that I have learned is useful in my campaigns.  If you see powerful, sea-faring cultures in one of my games - you can be assured that there is a little o Atlantis in all of them.

So go forth research what you love.  Even if it's about the gestation period of the tsetse fly, I bet there is something there that can be plopped right into a campaign - making it all the more rich.

Oh, and for your reading pleasure, here is some of the research material on my shelves in my last great fact-finding tour of Atlantis.  Enjoy!

- Ark
Posted by Arkhein at 9/15/2011 12:49:00 PM
Email ThisBlogThis!Share to TwitterShare to FacebookShare to Pinterest
Labels: dungeonspiration