Elemental Evil Player's Companion and What Does It All Mean? 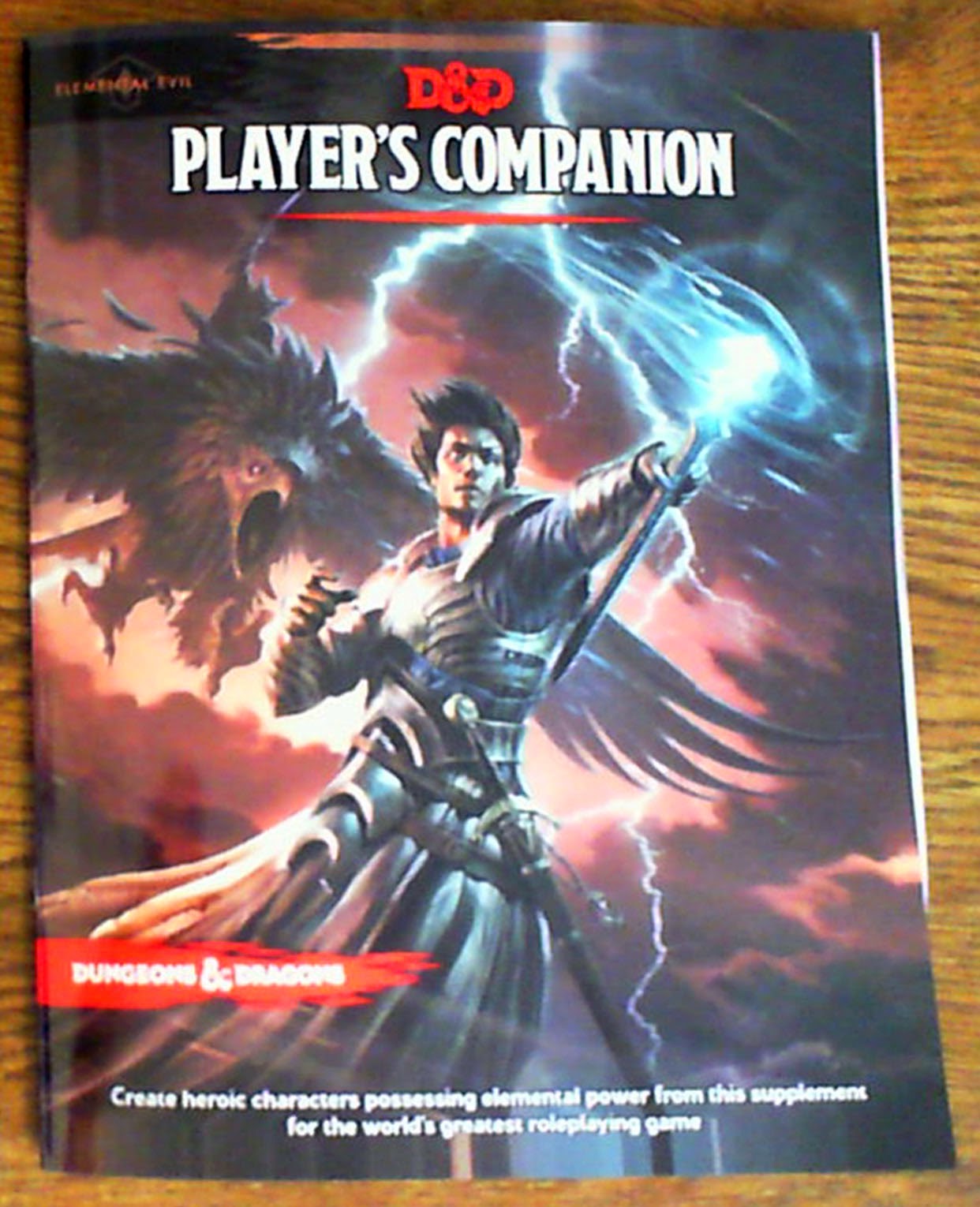 I can't believe it's been almost four months since I posted an rpg related post on my RPG RELATED BLOG.  Oh well.  Life goes on.

So, yeah, Elemental Evil Player's Companion.  This was originally a pdf supporting the Elemental Evil Princes of the Apocalypse adventure book, chock full of new player races and spells that had a good elemental feel.  It's available for free, along with a free DM supplement that includes tons of stuff, including all of the beasties in the adventure, making the Monster Manual an optional purchase.  (Yes, they are unabashedly giving away the monster farm.)

Now, some of the bits of the Player's Companion are in the Princes of the Apocalypse book , and some are not.  Kind of a pain if you are lugging around books and you need a pdf viewer TOO.  But WOTC did something odd about a week ago.  They made a Print On Demand version available on the D&D Classics site.

Sure, yeah, ten bucks is a bit much for 25 pages, but I ordered it anyway since I was curious and didn't want to screw around with a Lulu version.  I've never heard of WOTC doing POC, so I was intrigued.  I think it's a first.

So how is it?  Well, it just came in the mail during a torrential downpour, and luckily didn't get soggy.  It looks great.  Magazine kind of stapling.  That should be good when the players get their grubby hands on it and the elf wizard starts to horde it during play.  Glossy paper would have been nice - but it's decently thick paper so should hold up. 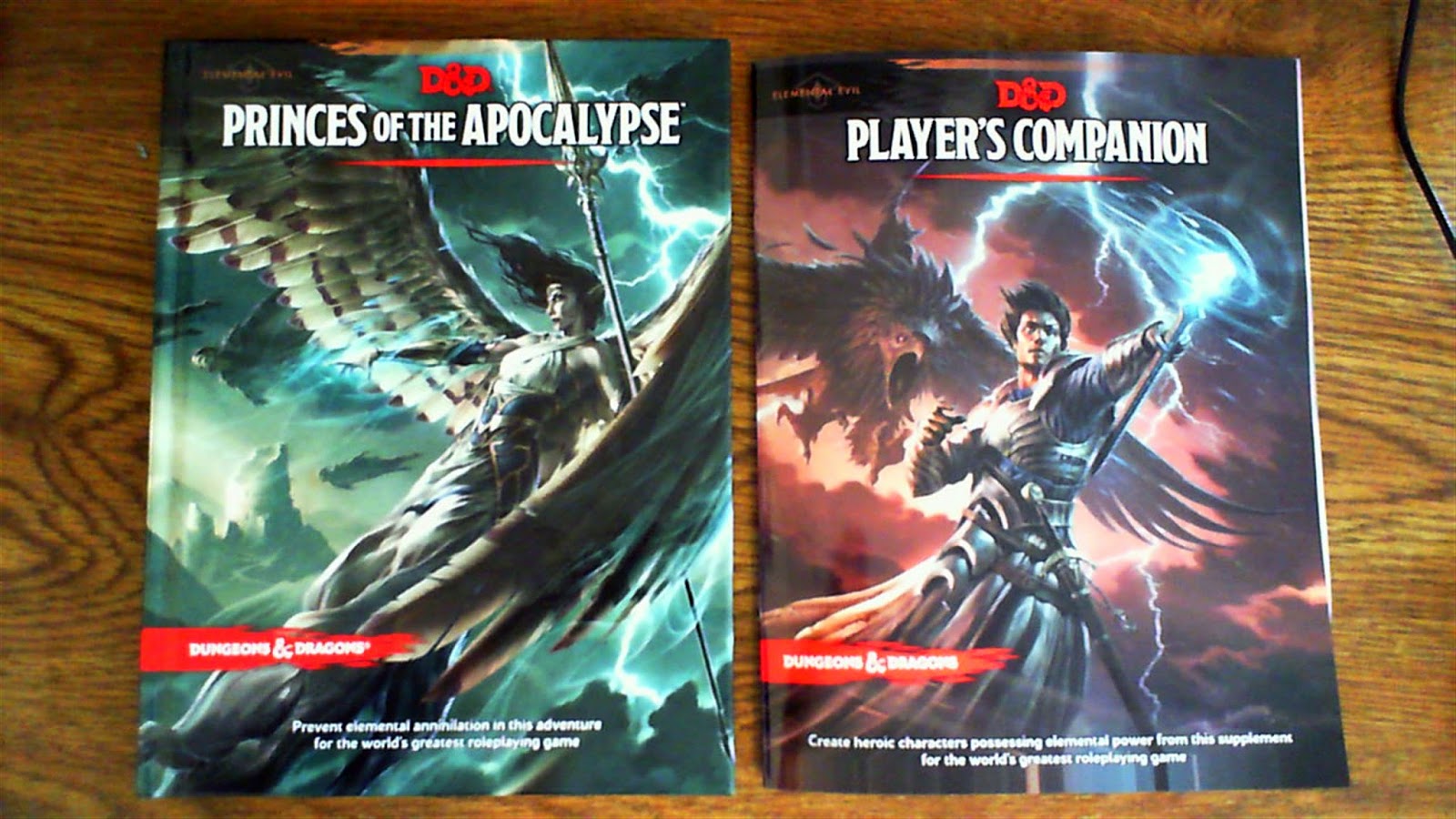 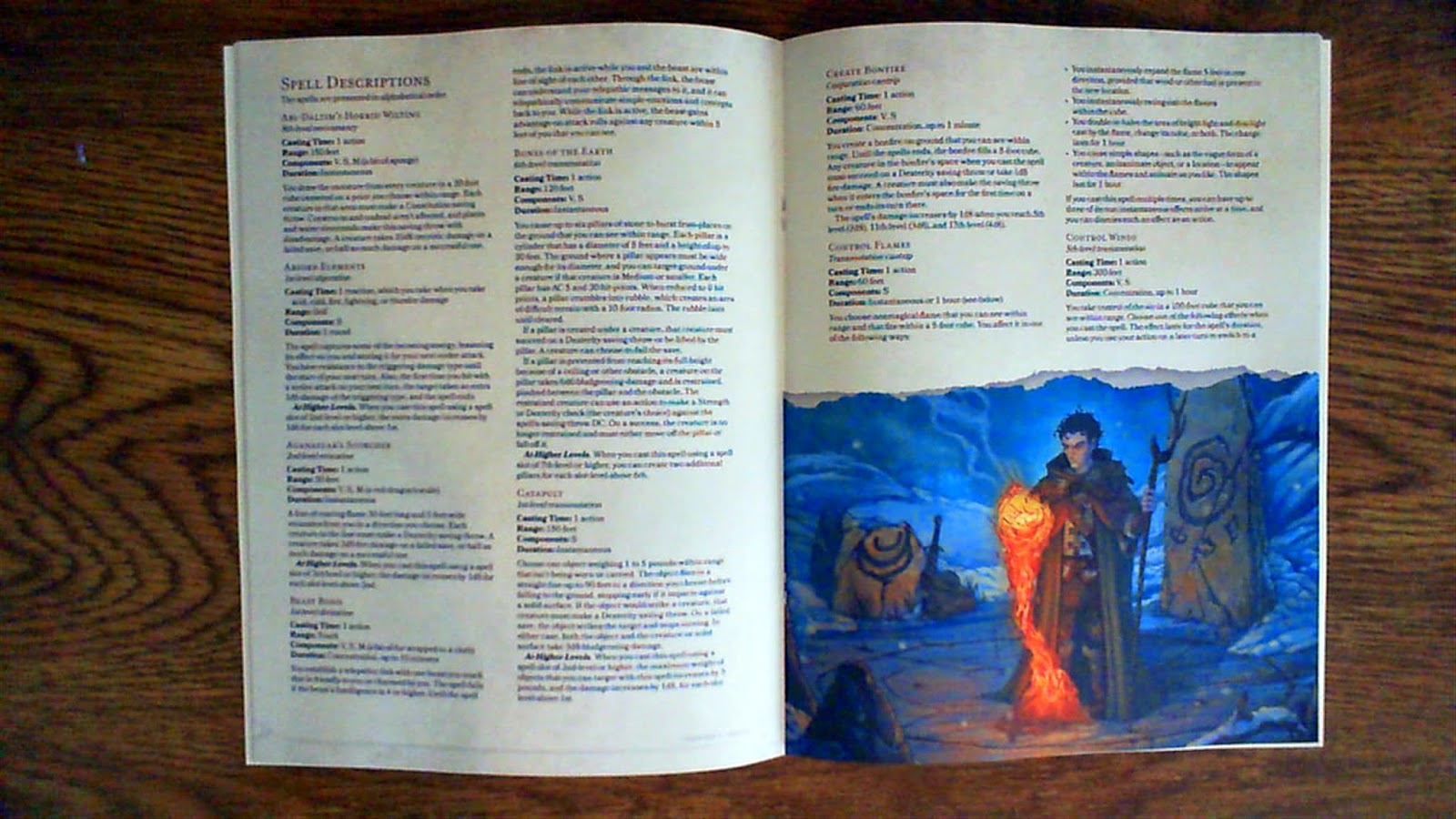 So cool, yeah.  A bit pricey, yeah.  But I think I'm far more interested in what this product means to D&D, rather than the actual content.  What does it mean?  I have no idea.

Per this article, D&D is focused on STORIES.  Stories across it's entire line - tabletop and MMORPG - as well as traditional computer rpg type games (non-internet-y) and even movies.  They want to do one to two 'stories' a year.  Tabletop is just a small part of that.  A part, yes, but small.  So no Player Handbook II or any of that jazz.  Probably not any additional Monster Manuals or even campaign books.  Just adventure books with enough new races, classes, monsters, and magic to properly dress up whatever adventure is occurring.

And that means no big splat books for players.  I am like . . . thrilled . . . at the thought of that.  Both as a player and a DM.  I'm less enthusiastic about a dearth of new campaign world books, but honestly, enough were produced during 1st through 4th edition to sink a ship.  A lot of them are sitting over on the book shelf staring at me.

I think this does something else.  Remember back in the 80s when there were just not a ton of splat books being made?  If a DM needed something in a game, they'd just make it themselves or check out Dragon Magazine for ideas and mechanics.  Starting at 2nd edition, we had the attack of the splat books.  DMs didn't need to invent or hack the game.  They just bought a book.  Players too.  It started an arms race between players and DM, in fact.  By 4th edition, the immensity of options just spun my head.

But now we are sitting here with a shiny new D&D, waiting for mana to drop from WOTC.  But no mana is dropping.  STORIES are coming, sure.  WOTC is spitting out a lot of articles with TINKER ideas, like beta concepts for Eberron races and classes, artilces on how to twist existing classes into something you'd like to play more, and how to stat up D20 modern weaponry in 5e.  But it's all hobby/tinkery/kitbash stuff.  Nothing official.  Just 25 or 50 pages of STORY specific splat per year.

I think that is wonderful.  I am full circle back to the early 80s, with Gary Gygax moving out to California busy trying to monetize D&D with cartoons and action figures, leaving the game alone and letting us tinker our asses off.

Yeah, sure, they'll get bored and make another Unearthed Arcana, but we can deal with that when it happens. :)

- Ark
Posted by Arkhein at 4/24/2015 02:01:00 PM
Email ThisBlogThis!Share to TwitterShare to FacebookShare to Pinterest
Labels: Dungeons and Dragons