Chekhov's Can of Soup 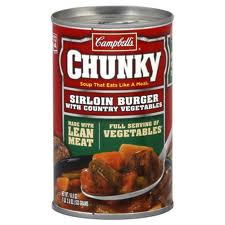 My son has been home sick for the last few days.  He's a pretty social kid, and he was beginning to go stir-crazy.  After work today, I noticed Denis the Fighter under some papers on my desk and asked the boy if he wanted to finish buying equipment and filling out the rest of his sheet.  He looked about as excited as I am confronting 1040 Full Form Income Tax Return - but said yes.

After settling on the banded mail, shield, and long sword (who needs the rest of the stuff?) we moved to the Saving Throws.  He looked confused.

"Yeah," he said, eyeing the chart full of numbers.

"Well, that's kind of a dumbed down version of the classic Saving Throws.  Some things just hit.  A dragon shouldn't have to roll to blast you.  If you just stand there, you are toast.  It's up to you to pull yourself out of the frying pan.  Or to not look at the medusa.  These are the numbers you have to roll."

"Oh," he nodded.  He did a few test rolls.  Poor Dennis would have been a burning, petrified, poisoned, dead Fighter.  My son frowned.  We moved on to Armor Class.

"So when did AC stop being upside down?"

"Okay, let's see," I opened to the monsters and immediately saw the entry for Zombie.  "So Denis is in the dark labyrinth with his sword and, um, well, he probably would have brought along a torch too in his shield hand.  And suddenly, a zombie jumps out!"

His eyes widened.  "I stab at him!"  My son arced his arm over his head and I leaned back just in time to avoid getting a broken nose.

He dug for his special multi-colored lucky one that he loves, except when it rolls low so he has to give it a stern talking to.

"Booyah!  Now damage," he understood that one pretty well.  "Okay, 6 plus my strength bonus is 7.  Does that kill him?"

"Dunno.  Let me roll his hp."  Before he could even ask, I pointed at the zombie entry. "See, he's got 2 hit dice.  That's like levels.  So I roll 2d8 for his hit points.  No one just a a flat amount of hp around here.  There we go - nine hit points.  So your sword sends chunks of rotting flesh flying, but your zombie friend is still standing andis  looking to get his dance card punched again."

My son has learned over the years to ignore most of the bizarre, out of place things I say and distill it down to what matters.

"Hold up - he attacks you.  Oops.  He swings his rusty sword over your head.  It would be quite a refreshing breeze if thick puss wasn't oozing from his eye sockets."

"The zombie explodes like a can of Campbell's Chunky Sirloin Burger with Country Vegetables put in the microwave for 30 minutes."

"EWWWW!" he said, and went on the clean out the next eight rooms in the impromptu dungeon.  The two lizardfolk at the end gave him some trouble, but Denis the Fighter came through with his scalp intact.

A great big smile was on his face.  "That went by so fast.  It would have taken forever with Essentials."

I grinned.  "And where were all the minis?"

"In here."  The pointed to his forehead.  "I imaged the whole thing.  Denis has great big muscles."

He nodded it the excited way he does, slapping his chin on his chest.  "And, um, I was wondering.  If I'm sick tomorrow, can we play a whole adventure?"

I imagined spending the day throwing the bones and chasing my son around in his mind with beasties and wicked bear traps.  It sounded really nice.  But suddenly I had to be the Dad.  "I don't think you are sick any more.  And even so, I still have to go to work."

He looked down and sighed.

"But since you've been sick, I haven't signed us up yet for the RPGA games yet this weekend - and they are pretty full.  Why don't we stay home this weekend and I can take you through something."  I glanced briefly at the purple module on my desk that had just arrived in the mail.  Keep on the Borderlands winked back at me.

- Ark
Posted by Arkhein at 1/26/2011 10:56:00 PM
Email ThisBlogThis!Share to TwitterShare to FacebookShare to Pinterest