The Metallic Mouse That Doesn't Rust 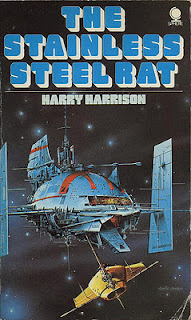 The books follow the adventures of  'Slippery Jim' DeGriz, one of the biggest thieves and con-men around.  It's over 32 thousand years in the future, and most of humanity has grown up and solved problems like war, plague, famine, and crime.  This has left the universe a very boring place, and for hyper-intelligent people like DeGriz, such boredom is simply unacceptable - so he stirs the pot and sows as much chaos around as possible.

He's not a 'bad' guy.  Slippery Jim doesn't like hurting people - and killing people outside of self-defense is definitely not on his list of things to do.  But as long as he's sure the insurance will cover it, he'll steal anything - and the more complicated, the better.  His sheer outrageousness and intelligence puts him at the top of the most wanted lists, and makes him the target of the galaxy's super police, the Special Corps. who eventually employ him to catch other ne'er-do-wells, stop war-mongering planets from mongering, and fix time itself.

The Stainless Steel Rat books became a template of how I constructed just about every Top Secret and Star Frontiers campaign I even ran.  'Slippery Jim' is essentially a PC - straight out of a game - a smart ass there to amuse himself and put on a spectacle for others.  The stories are essentially sandboxes with some loose 'mission' that ties everything together, but the Rat is free to wander entire planets to complete his objective - usually in whatever timeframe he feels like.  One minute he's pretending to be a janitor herding robots with a whip, the next he's a billionaire on a golden space yacht.

The players fell into the pace quite easily.  A grumpy 'administrator' gives the team an assignment.  They get dumped off undercover far away somewhere and start snooping around.  They discover the 'bad thing' is being done by some rich guy. They need funds, so they knock over a bank.  They then go pretend to be millionaires (well, at that moment they 'are' millionaires)  A chase ensues.  The bad guy gets away.  They chase him to another planet.  Then they discover that the rich guy controls the mafia on that planet, so they have to join and work their way up the ranks until they have access to the guy.  Etc.  Great fun, and lots of role playing,combat, scheming, lying, and stealing to be had.

The formula worked for both Top Secret and Star Frontiers.  On the surface it may seem very James Bond-ish, but there is a certain air about The Stainless Steel Rat.  It's . . . well . .. it's chaos.  Much like the Honey Badger, 'Slippery Jim' DiGriz don't give a shit.  He does what he does for fun - not for duty, honor, or what is best for society.  That's really what makes it.  There is nothing to 'convice' the PCs to do.  They are given a job, and they figure out the most fun way to accomplish it - preferentially with lots of explosions and loose cash.

And, strangely, the books allow for a great way that relative npcs can be useful and fun.  See the novels for details. :)

I'm already chewing through the second book in the series - The Stainless Steel Rat's Revenge - grinning away.  I've also got Retief of the CDT next to me as well - speaking of great books to turn into adventures.  It's giving me a big itch to run some Ratty Sci-Fi games, big time.  And over on the table is Stars Without Number.  Geez.  Gamer ADD, take me away!