Redshirts: A Stars Without Number Campaign 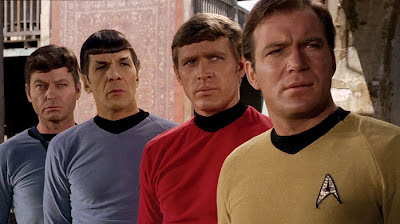 This doesn't really have anything to do with Star Trek, or the John Scalzi novel.  It's more of the working title for a campign idea that I had that just . . . kinda . . . stuck.

I wanted to run a Stars Without Number campaign at the local FLGS - open to anyone who dropped by - at random dates and times. To me, the stardard trope of Traveller-esque 'intergalactic tramp steamer' doesn't seem like it would really work.  Each character is pretty vital to the operation of the ship, and having people disappear and reappear - while doable - doesn't tend to make sense.

So, the idea is to have the PCs be freeze-dried scouts.

For 100 years, the two major powers of the Ptolemy Sector have been waging war.  The Skorpios Empire, a bunch of Russian-speaking vat grown genetic purists, are pretty sure they have discovered the best way for people live, and enjoy enforcing that way at gun-point.  The members of the Aquila Union are not too fond of their neighbors, and have been keeping them at bay for three generations with their powerful navy.  But due to recent events, including secession by several powerful systems, Aquila faces eventual defeat. 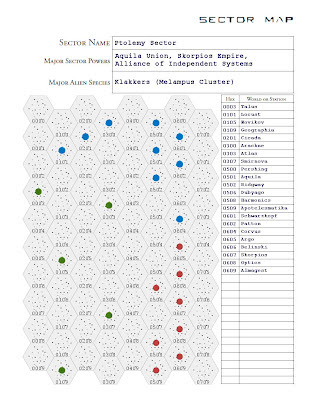 In an ancient bunker deep within the crust of an abandoned planet, The Aquilans found a possible solution to their demise - a spacecraft surpassing any existing technology.  Current spike drives allow for passage between systems 3 hyperspace hexes away (see sector map.)  While all of the systems in the Ptolemy Sector are reachable - the density of systems drops off in neighboring sectors, making travel outside impossible.  Until now.

The Aquilan Navy immediately refits the ship for active use, renaming it the AUS Reprieve.  Its mission is to explore the systems of The Void and find whatever can be used to help defeat the Skorpios Empire, be it technology, allies, or something beyond imagining.  The assumption is that since The Void was unreachable with standard technologies, then the Scavanger Fleets would not have stripped the systems bare during the Silence.

The PCs are members of the Void Expeditionary Force.  They are not crew members of the Reprieve itself, but scouts that are put into cold storage until needed.  The Reprieve is too valuable to be put into danger, so the ship will stay on the edge of a target system, thaw out the scouts, and send them by shuttle to perform reconnaissance and do as they see fit for the benefit of the Union.

Each game session would present a new system and a new set of adventures for the PCs to pursue.  Players could come and go from time to time, with those not attending just spending time in the freezer.  They would be given a wide berth in how they handle situations, as the captain and all of the command staff are back on the Reprieve doing long range scans and filling out paperwork on whatever goofy messes that scouts created during the last adventure.

So - those are my thoughts so far.  I think it will be fun - handled right.  I certainly don't want an atmosphere of railroading, and I think making sure that the PCs actions, and the results thereof, impinge upon the decisions of the command staff for the next adventure, will do so.

Of course, they could just kill the captain and become pirates in the fastest ship in the quadrant.  Hmm.

Any suggestions or thought are welcome. :)

- Ark
Posted by Arkhein at 9/20/2012 09:24:00 PM
Email ThisBlogThis!Share to TwitterShare to FacebookShare to Pinterest
Labels: Stars Without Number